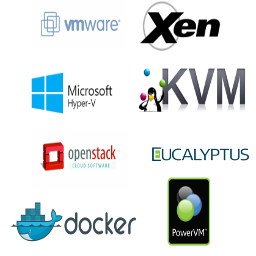 Virtualization is a broad computing term used for running software, usually multiple operating systems, concurrently and in isolation from other programs on a single system. Simply it’s a way for a machine (Host) to run another operating system (guest virtual machines) on top of the host operating system.

There are two types of hypervisor used with Server / Hardware virtualization:

There are several methods for Server / Hardware virtualiziation, we will focus on the widely used two methods “Full virtualization (FV), and para-virtualization (PV)”. Guest operating systems are hosted on virtual machines using any of these two methods.

Virtualization design provides many capabilities to your organization. Virtualization of operating systems is used in many different computing areas. By using virtualization we are capable of doing the following:

Server consolidation: Many servers can be replaced by one big physical server, so hardware is consolidated, and Guest Operating Systems are converted to virtual machine.

Isolation: guest operating system can be fully isolated from the Host running it. So if the virtual machine is corrupted, the Host system is not harmed.

Migration: A process to move a running virtual machine to another physical machine. Live migration is an extended feature that allows this move without disconnection of the client or the application.

Disaster recovery: Virtualized guests are less dependent on the hardware, so disaster recovery is quicker and easier when the systems are virtualized. On a physical system, if something serious goes wrong, a complete re-install of the operating system is usually required, resulting in hours of recovery time. However, if the systems are virtualized this is much faster due to migration ability. If the requirements for live migration are followed, virtual machines can be restarted on another host, and the longest possible delay would be in restoring guest data. Also, because each of the virtualized systems are completely separate to each other, one system’s downtime will not affect any others.

Virtualization brings a lot of advantages while providing the same service as a hardware server. First, it reduces the cost of your infrastructure. Servers are mainly used to provide a service to a customer, and a virtualized operating system can provide the same service with almost the same performance as bare metal systems , adding to that the following advantages:

Agility and productivity: Virtualization provides migration capabilities, live migration and snapshots. These features reduce downtime, and bring an easy way to move your service from one place to another without any service interruption.

Extended life for installed software: Older versions of software “legacy software” may not run on newer, bare metal machines directly. However, by running the older software virtually on a larger, faster system, the life of the software may be extended while taking advantage of the performance from the newer system. This saves us extra money for upgrading the legacy software.

Less hardware: You can run several operating system on one host, so all hardware maintenance will be reduced.

Less power/cooling: Less hardware means you do not need to invest more in electric power, backup power, and cooling if you need more service.

Less space: Consolidating servers onto fewer machines means less physical space is required. This means the space normally occupied by server hardware can be used for other purposes.

Less maintenance: Using a VM Guest simplifies the administration and maintenance of your infrastructure, less time is spent maintaining the VMs. This means less money being spent on parts and labor.